An emerging thread in the ‘Let’s build peace here and now’ conversations with local peacebuilders is the transient nature of peace, the understanding that ‘peace, not conflict, is episodic.’ In order to unpack this further we spoke to Serbian peacebuilders Jelena Memet, Anita Pantelić and Galina Maksimović who talked about the ways in which ‘war’ continues in Serbia highlighting the economic dimensions of conflict.

Equally, they drew attention, the protracted and complex nature of peace-building efforts years after the war has ended. There is a long history of young women in Serbia resisting war as well as their efforts to create spaces for dialogue and build solidarity to this day. They share the essential elements, the connection and sisterhood, from their experience of building and sustaining peace.

The transcript of the session is available here. We are also sharing the key points and learning shared by Jelena, Anita and Galina through three blog posts. This is the first of them. 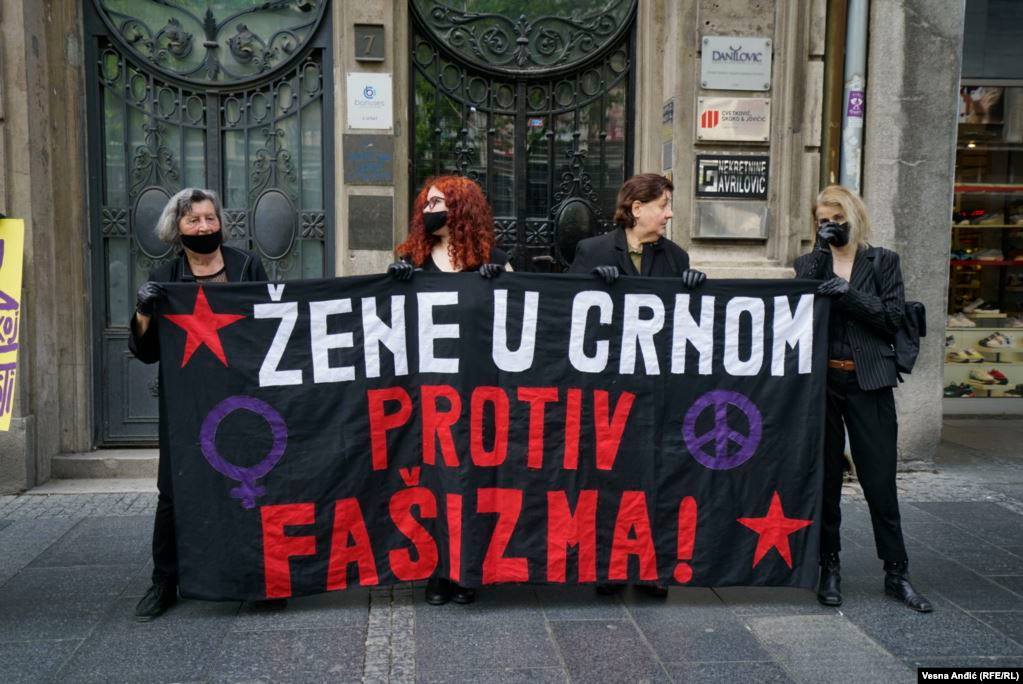 Galina is the Programme Coordinator for the Reconstruction Women’s Fund in Serbia, which was founded by activists who worked as part of the feminist movement at the intersection of the anti-war movement in former Yugoslavia.

For Galina, ‘the wartime economy shaped the economy of today….[in fact] the economy is a sort of continuation of war.’ The economy was at the root of the original conflict, she explains, because ‘the republics making up Yugoslavia were on different levels of economic development. Kosovo, for instance, was highly underdeveloped, Slovenia was on a different level.’

Though the republics were nominally socialist, privatisation was beginning to happen during the conflict. ‘Most of the factories bought at the time were bought for not much money, so it was all about connections and personal influence….the biggest employers today, their money originates from war-profiteering.’ There was also a thriving black market, run by people who ‘went to war at weekends,’ stealing consumer goods, typically electrical goods ‘and re-selling them at home. That’s also how some start-up capital was accumulated, and it also makes up a significant portion of today’s higher-middle class wealth.’

At the end of the war, though the country began a transition towards democracy and capitalism, it often doesn’t seem like it. ‘We don’t really feel much of democracy or anything positive right now,’ In fact and in the same way, though there is officially peace the continuation of the conflict by other means continues. ‘In the early 2000s – these are the times that I remember as a child – many of the privatised factories started to go bankrupt. The workers typically worked for many months without wages. This was really a widespread phenomenon…and to continue this parallel between regular war and economic war,…both wars produce death. In an armed war, death comes quicker, in this economic war, it’s a slow painful death.’

As Galina explains, what any sort of war needs is ‘the enemy’. Serbia is not officially at war with another state, ‘yet the situation and the atmosphere of actually being engaged in a conflict remains and this is maintained through public narratives and production of the “otherness”, of some sort of imaginary enemy. All sorts of minorities in Serbia are marginalised and portrayed as the other and all sorts of conflict narratives are produced to keep people divided. These are the narratives that fuel anger and nationalist feeling, which keeps people in a state of hostility.’

A large part of this is the question of identity. A nation is never more conscious of itself than when it feels it is threatened – whether this threat is real or imaginary. ‘As Yugoslavia was breaking up, the republics that took its place were losing their identities.  In Serbia, we rebuilt ours and most of our new identity was based on a nationalist mythology that was mainly rooted in stories about Kosovo. Since Kosovo declared its independence, that narrative became stronger than it was before, and some new myths have even been produced and are treated publicly as if they are ages and ages old.’

This is why ‘we are not dealing with the essential problems – with the economy, with labour rights – because there is so much attention devoted to identity-building, and in the case of Serbia, we tend to paint our identity with sacrifices and this again adds to the economic problems, because poverty’s being glorified, the more you suffer, the more of a Serb you are. That’s what keeps us where we are. Two days ago, there was a fire in my hometown, in a squatters’ neighbourhood. One woman and her child burned to death…they were the victims of the economic war. Capitalism, cruel institutions was what killed them, because they never received proper support from the city authorities, they never got social housing, and everything is set up in such a way that it became almost inevitable.’ If it hadn’t been the fire, it would have been something else. ‘There is no support at all.’

‘Women are leading the struggles against wars and against militarism,’ not just because it is women who continue and embody the virtues of peace, but also because ‘women are victimised in wars through sexual violence mainly, which is also a war weapon. So women do not have a choice about being there at the front.’ But she ends on an optimistic note: ‘Our power comes from really deep struggles, but it’s a power, and it’s always step by step, and we live, we work, we hope.’

Andrew Milner is a freelance writer, researcher, and editor specializing in the areas of philanthropy and civil society. He is a consultant to Philanthropy for Social Justice and Peace. He is also a regular contributor to and Features editor of Alliance magazine.